Incredible Power of the Iguassu Falls, Sharing a Tweet with toucans and macaws

I flew to Foz de Iguassu on 19 June, a day before my six month visa for Peru expired, and shortly after the National Park had been closed due to severe flooding with a river bursting its banks.  I arrived at the Iguassu Eco Hostel located just 500 m from the entrance to Iguassu Falls and loved it instantly.  I booked to stay in an 8 bed mixed dorm for a week and after the first two nights when I met some lovely people, I had the room to myself.  I watched monkeys swinging from the trees at breakfast and coatis wandering around the grounds.

I visited one of the Seven Wonders of the Natural World the day after I arrived and we had beautiful blue skies and hot weather which was fantastic for photos.  I was taken aback at the incredible sight of the falls which stretch over an 8 km distance between Brazil and Argentina.  The water flow was over five times the normal level due to the flooding and to experience the power of the water energy was breathtaking … and very cleansing as I got soaked in the spray. The highlight was doing a boat tour up to the falls and going so close to them that it felt like the boat was directly underneath due to the volume of water splashing down on me.  What an experience!  I feel truly blessed to have seen the falls with so much power – the last time they were like this was over 30 years ago!

Two days after visiting the falls in Brazil, I took three buses and crossed the border to see the falls from the Argentinian side which were equally awesome. The floods had swept away a couple of bridges so some of the viewpoints will be closed until the end of the year until repairs have been carried out.  There wasn’t much sun on the overcast day meaning I didn’t see many rainbows but this didn’t dampen my spirits and I felt very blessed to have the opportunity to be there sharing the day with three lovely souls (Katie, Beth and Rion from the UK) who I’d met at the entrance.

We had torrential rain the first time I walked around the trail at the bird park and it was so good that I did it a second time immediately I’d finished as the rain had dried up and although I’d used up all my battery power on my iPhone, my iPad was fully charged!  The opportunity to be inside enclosures with free flying birds such as toucans and macaws is a rare one and I took my time, loving every moment of being up close to these vibrantly coloured birds.  I got some great photos and was very impressed with the conservation work going on to help endangered species – not just birds but with plants too.  The trails through tropical gardens with exotic plants was breathtaking and rejuvenating and I felt like I was Alice walking through Wonderland.

I didn’t know this site was one of the Seven Wonders of the Modern World until I arrived and saw the signs!  I opted to do the 2.5 hr special tour and had the opportunity to go inside the plant and see the engineering and workings which was fascinating.  I felt moved when I found out about the conservation work and heartened to hear that the plant supplies 100% of Paraguay’s electricity and 75% of Brazil’s.  It is situated between the two countries who split everything 50/50. Paraguay has a surplus of electricity which is sold back to Brazil.  This really is a great example of two countries working harmoniously together and I was glad to have made the visit there. 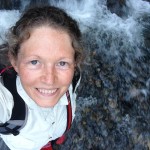